In tonight’s episode of Bigg Boss 14, we shall see Aly Goni and Abhinav Shukla get into a verbal spat amid the task ‘Locked Out’. It all began when Nikki Tamboli, Devoleena Bhattacharjee and others barged inside BB house to eat desserts 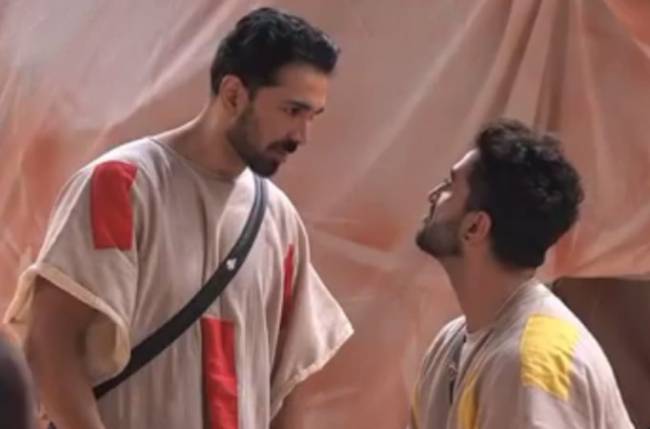 MUMBAI: In last night’s episode of Bigg Boss 14, we saw the ‘Locked Out’ task continue. While the red team had Rubina Dilaik as it’s leader, the yellow team’s leader was Rahul Vaidya. Nikki Tamboli, who is actually in the yellow team, switched sides and is playing for Rubina’s team. The first day of the task was won by Rubina Dilaik. However,k towards the end of the episode, we saw desserts being brought in, and before Rubina Dilaik could settle who would go in, Nikki Tamboli, Devoleena Bhattacharjee and others barged inside. Aly Goni was furious and tried to stop the housemates, which later led to a fight between him and Abhinav Shukla.

While the episode ended after Nikki Tamboli ate the cake, and others had also entered, Aly Goni expressed his disapproval about the same. Later, the preview for the next episode showed Abhinav Shukla and Aly Goni get into a verbal spat. While Aly told Abhinav ‘naach Bandar naach’, Abhinav calls Aly Goni ‘bhains’ during the heated argument. Both of them looked furious, and looks like we shall see a huge fight between them in tonight’s episode.

In other news, post Jasmin Bhasin’s eviction, Aly Goni’s sister Ilham Goni, in a conversation with IANS, said that she feels Aly will give his 100 percent in the game now, as his purpose of supporting Jasmin doesn’t exist.

“He will play for himself and as Jasmin asked him to reach the finale and win, he would do that. He would want her to be happy now and will play even better than before,” said Ilham. Meanwhile, Jasmin Bhasin has also been rooting for Aly Goni to win the reality show.

Stay tuned to this space to know more