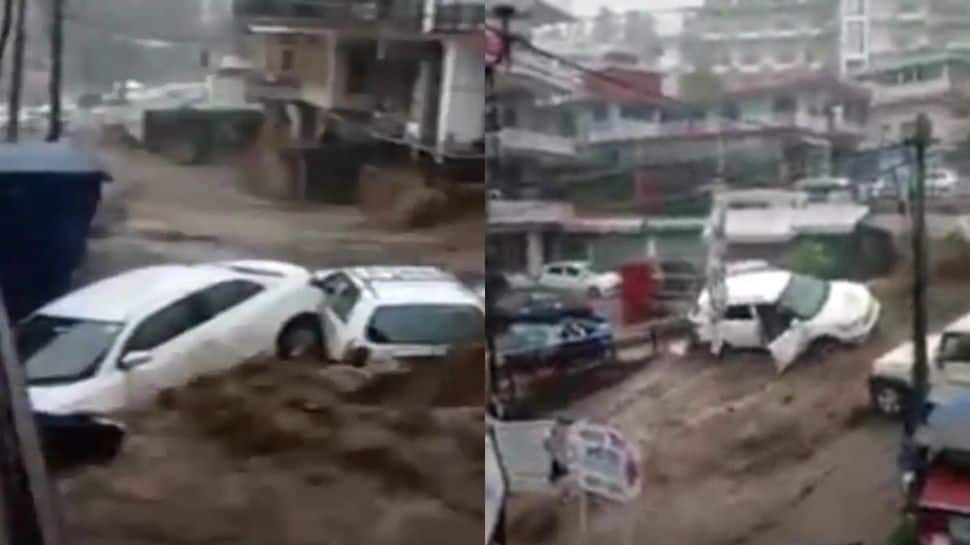 New Delhi: Heavy rainfall in Himachal Pradesh’s Dharamsala on Monday (July 12, 2021) led to a flash flood-like situation. Several roadside parked cars were swept away, hotels were damaged following a cloudburst in Bhagsu village near Mcleodganj which caused a flash flood in the area. However, there was no loss to human life.

The incident was triggered after a night of relentless rain. Dharamsala, which is over 250 km from the state capital, recorded the precipitation of 119 mm, the highest ever in this monsoon.

According to a report in IANS, three houses and five shops located along a seasonal rivulet in the Gaggal area were damaged owing to the gushing of water. The damage to the property was largely owing to encroachments on rivulets.

Several horrifying videos were posted by netizens on various social media platforms after the flash floods. Take a look at one such video here:

Additionally, Manmohan Singh, Director of India Meteorological Department (IMD), told IANS that heavy to extremely heavy rainfall was recorded at many places in Kangra district. The rainfall was widespread in the state.

Palampur in Kangra district recorded 155 mm rain, the highest in the state, while it was 48 mm in Dalhousie, 10 mm in the state capital and 55 mm in picturesque tourist resort Manali.

The weather bureau has forecast heavy rain at isolated places in the state till Wednesday.