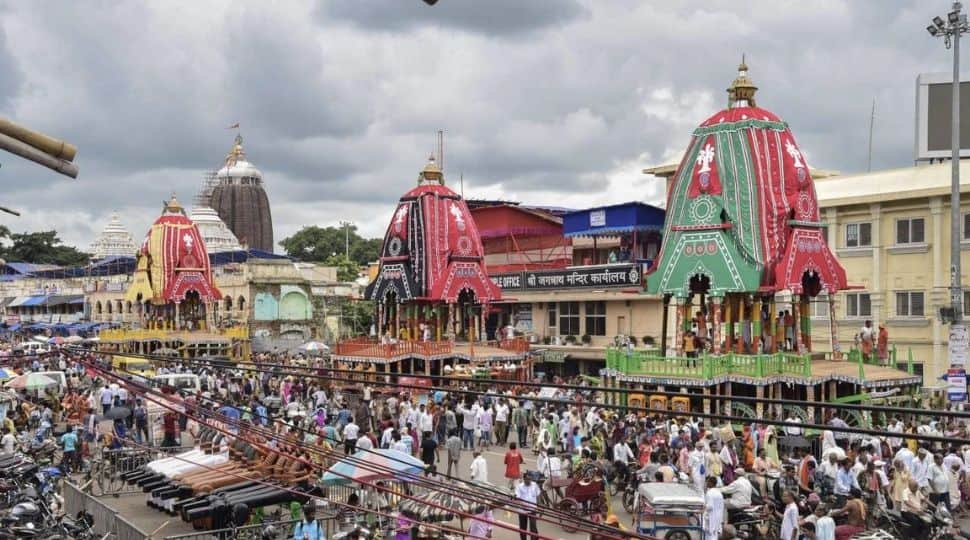 Puri: As the nine-day long festival, Rath Yatra began in Odisha from Monday (July 12), a two-day curfew has been imposed and a total of 65 platoons of police force have been deployed across the city, informed Narasingha Bhol, IGP Northern Range. Speaking to ANI here on Sunday, Bhol said, “Ahead of Rath Yatra, curfew has been imposed from 8 pm, July 11 till 8 pm, July 13 in Puri. 65 Platoon have been deployed at different points. No devotees are permitted to attend the yatra.”

He had yesterday said that secret rituals of Lord Jagannath would take place at night before the deity is carried from the temple to the rath. According to the Administrator of Puri Jagannath Temple, Ajaya Jena, the servitors testing negative for Covid-19 would be allowed to participate in the pulling of the chariots. Krishan Kumar had asserted that everyone involved in the conduct of the yatra has been tested and only those who have tested negative for COVID-19 are being allowed to participate.

“Further, secret rituals of Lord Jagannath would take place at night, and tomorrow morning lord Jagannath will come out of the temple and go to the Raths. We`ve tested everyone whosoever is involved in the conduct of Rath Yatra and those who`re negative are being allowed to participate,” said Kumar. The annual Rath Yatra of Lord Shree Jagannath in Puri is being held this year and servitors who have received vaccine shots and have tested negative for COVID-19 will be allowed to attend rituals. This will be the second year in a row when the devotees will not be allowed to attend the celebrations due to the second wave of the COVID-19 pandemic.

Announcing the decision Odisha Special Relief Commissioner, Pradeep K Jena on Thursday said that the Supreme Court`s guidelines, which were issued last year on conducting the Rath Yatra will be followed this year too.

Similar criteria have also been followed by the police personal and officials will be deployed to conduct the Rath Yatra. The Supreme Court on July 22, 2020, modified its earlier order and allowed the annual Jagannath Rath Yatra in Odisha`s Puri to be held with the coordination of the Temple committee, State and Central government without compromising with the health issue pertaining to COVID-19.

The administration imposed curbs across the 3-km long Grand Road from Shree Jagannath Temple to Sri Gunducha Temple where all activities excluding medical emergencies are prohibited.

As many as 65 platoons (1 platoon comprise 30 personnel) were deployed for the smooth conduct of the Lords annual festival amidst prevailing COVID-19 pandemic.

Pulling of the holy chariots will start at 3 pm Monday (July 12).

The security forces will also be deployed on the rooftops of different buildings on both sides of the grand road in order to ensure that people do not congregate in large number to witness the festival from the residential houses, hotels, lodges, and guest houses.

Though there were no such restrictions on the people witnessing the Ratha Jatra from rooftops last year, the administration this time banned such practice after it came to the notice that some hotels, lodges and guest houses book rooms with the provision of allowing people to witness the festival from the rooftop.

Puri district collector Samarth Verma said that the people are urged not to come out of their residences during the curfew period from 8 PM of Sunday till 8 PM of Tuesday and make a crowd on the grand road.

The measure is taken keeping in view the public health and to check the spread of infection among citizens. He said people can witness the festival on their TV sets as the government has made arrangements to give free-of-cost feed to different channels and web portals.

Meanwhile, chief administrator of Shree Jagannath Temple Administration (SJTA) Krishan Kumar formally extended an invitation to Jagadguru Sankaracharya of Puri Govardhan Peeth, Swami Nischalananda Saraswati to visit the Lords on chariots as per tradition before they are pulled.

The Sankaracharya has accepted the invitation and he will come to Rath Jatra on Monday (July 12) with his six of his disciples, the SJTA head said.

As the three chariots- Lord Balabhadras Taladwaja, Lord Jagannath’s Nadighosh, and Devi Subhadras Darpadalan, are ready to roll on the grand road, Director General of Police, Abhay reviewed the security arrangements and he too appealed all including the people of Puri to cooperate in the implementation of the curfew orders in the public interest.

“With the cooperation of the residents of Puri and blessing of Lord Jagannath, all the rituals are underway smoothly so far. We hope the mega festival will be undertaken tomorrow peacefully in compliance with all SOPs,” said Puri SP Kanwar Vishal Singh.

President Ram Nath Kovind greeted citizens on the occasion of Rath Yatra and prayed that Lord Jagannath would bring them happiness, prosperity, and health.”My warm greetings and best wishes to all the countrymen, especially all the devotees in Odisha, on the auspicious occasion of the Rath Yatra of Lord Jagannath. I wish that with the blessings of Lord Jagannath, the lives of all the countrymen remain full of happiness, prosperity and health,” tweeted Rashtrapati Bhavan.

Greetings to everyone on the special occasion of the Rath Yatra. We bow to Lord Jagannath and pray that his blessings bring good health and prosperity in everyone’s lives. Jai Jagannath!